Other important initiatives against FATCA # 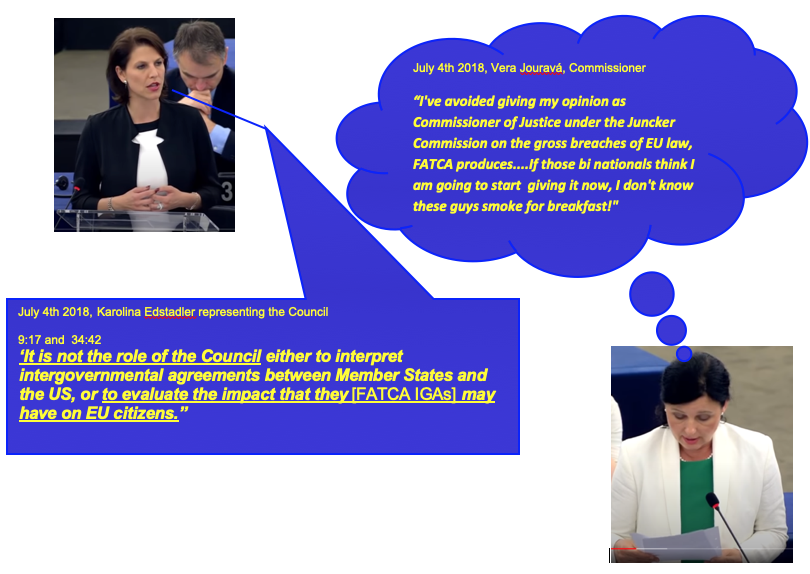 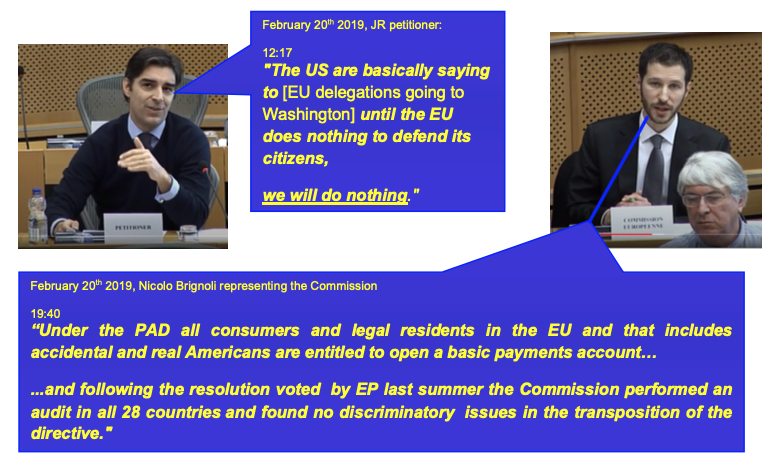 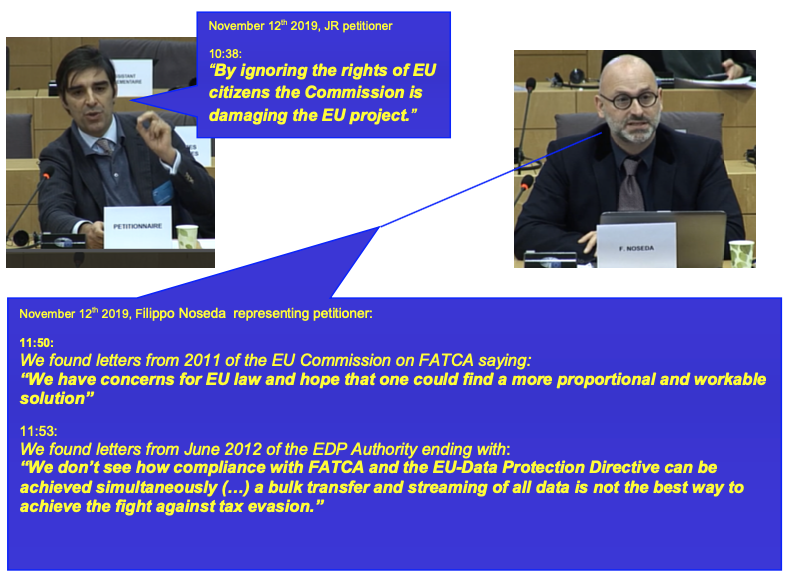 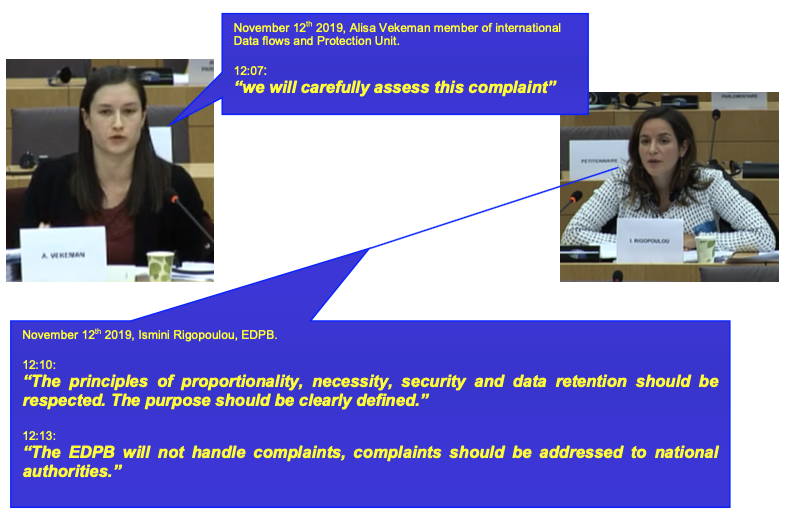 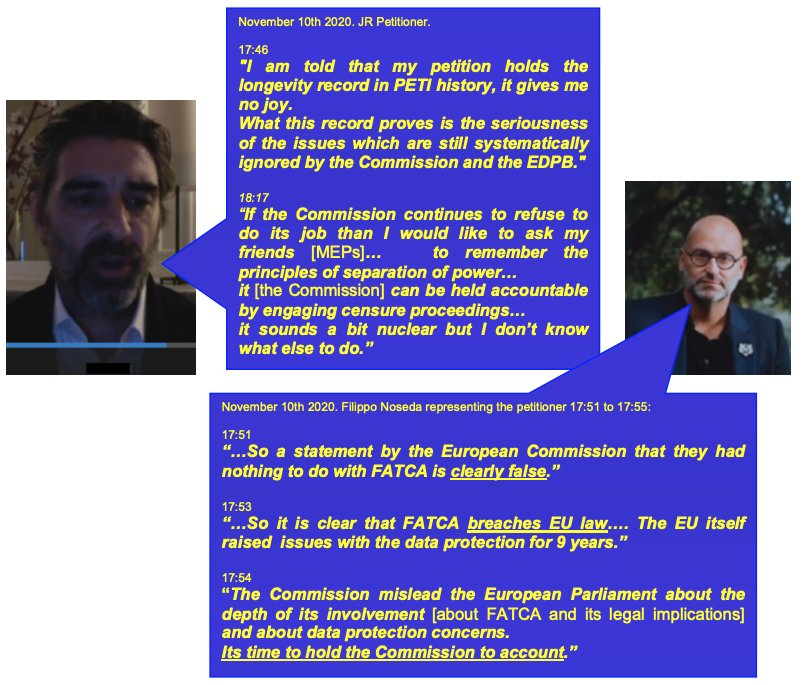 On February 16th 2021 FATCA was on the agenda of ECOFIN at the request of the Dutch government. After that meeting there was a >press conference with answers to FATCA questions: 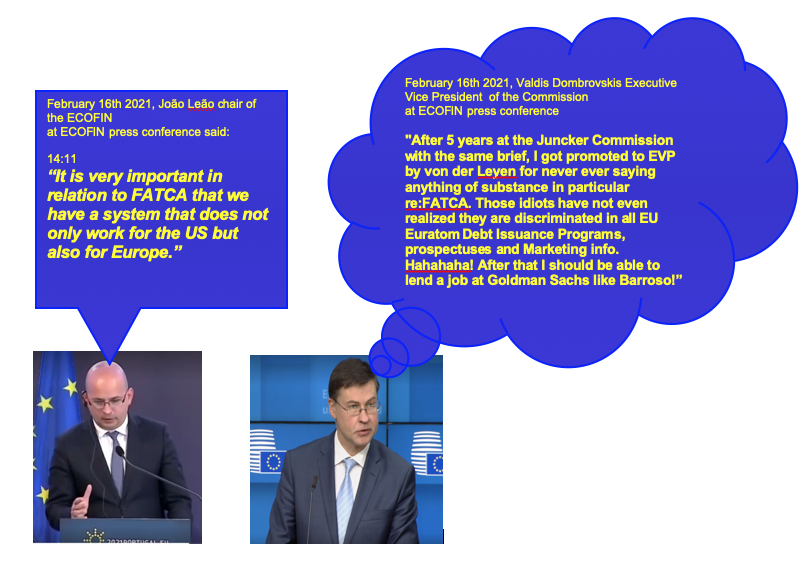 Quoted from her page: “Under FATCA, banks are required to send all of my personal and financial information – and that of all those like me - to US authorities on an annual basis.

I am bringing a claim against HMRC for sharing my personal and financial information with the IRS because:

Nobody should evade tax. My problem is not with FATCA’s objective but the disproportionate nature of the measure to achieve its objective.”

You can support the >crowd funding from Jenny’s litigation in the (UK) to protect the fundamental rights of Accidental Americans and other compliant US citizens living abroad.

Filippo Noseda is a lawyer and partner at Mishcon de Reya and Jenny’s legal counsel in the litigation against de British ICO for automatically exchanging her private information with the US IRS. He is also one of Europe’s top experts on the GDPR, Common Reporting Standard (thereafter CRS) and FATCA and is lead counsel in various lawsuits and complaints about FATCA and the CRS in particular.

Filippo Noseda is leading a formidable charge on FATCA and the EDPB and in a very unusual move has made his correspondence with both the EDPB and the ICO available for everyone to read on the internet. >Correspondence (mishcon.com)

Filippo Noseda spoke at the European Parliament >on November 12, 2019 at 11:49 to 12:00 proving that the Commission had serious misgivings about the compatibility of FATCA an EU law as early as 2010. The whole meeting lasted 120 minutes.

Filippo Noseda also spoke twice briefly >on November 10, 2020 in the European Parliament: The debate on FATCA starts around 17:45 and Filippo Noseda starts at 17:48. The whole meeting lasted 35 minutes.

This list was prepared to support Jenny’s claim that FATCA illegally exposes her sensitive personal and financial data to the risk of hacking. The EDPB’s position was not modified in spite of the CJEU’s repeal of the Privacy Shield and the reasons it gave for it. In another case, the UK tax authorities acknowledged that the incidents reported by Mishcon de Reya were ‘serious’, but refused to stop automatically exchanging information with a non member state.

The list includes multiple instances of hacking against tax authorities in the US, the UK and the rest of the EU, including a hacking against Bulgaria that led to the theft of the entire database of the local tax authorities (between 5 and 7 million citizens affected).  More recent incidents concerning the National Supercomputer and even the European Parliament confirm the fundamental problem of data security.

The Dutch Accidental Group and other European allies, was created in 2018. Its goals are:

L’Association des Américains Accidentels was created in 2017. Its aim is:

In 2020 the Volksbank (Dutch bank) closed the accounts of accidental American RA. RA went to court but lost his case. The judge stated that he understood the problems of RA and all other Accidental Americans but that the solution had to come from the government.

That’s why RA started this petition. “I hereby request your help to prevent my fundamental right to have a bank account from being violated”.

RA has started proceeding in court for this. You can support the >crowd funding from RA (NL) to protect the fundamental rights of Accidental Americans and other compliant US citizens living abroad.

Summary title: On exemption of US nationals from PRIIPS regulations due to FATCA

The petitioner denounces that due to the applicability of the extraterritorial “Foreign Account Tax Compliance Act” (FATCA) it is difficult for “US Persons”, resident in European Union Member States to obtain access to numerous financial services or products. He points out that this situation is specially problematic in the context of MIFID II (Market in Financial Instruments Directive II) and PRIIPs (Packaged Retail and Insurance-based Investment Products) regulations that require all investment products sold to EU residents to contain a “Key Information Document”, which, as he explains, to date no US domiciled funds have provided.

Due to the lack of funds compliant with EU regulations, most US brokers refuse to sell responsible and safe investment products to a known EU resident. The petitioner calls on the European Parliament to permit US-based brokers to sell publicly traded and SEC-regulated investment products to EU residents, provided that they meet the definition of a “US person” under FATCA, as an exception to MIFID II / PRIIPs rules.

Nicholas Lee has presented his petition to the EU PETI commission at Sept 2nd. See >PETI meeting at; 14:05 (presentation 5 minutes) and 14:39 (conclusion 2 minutes). 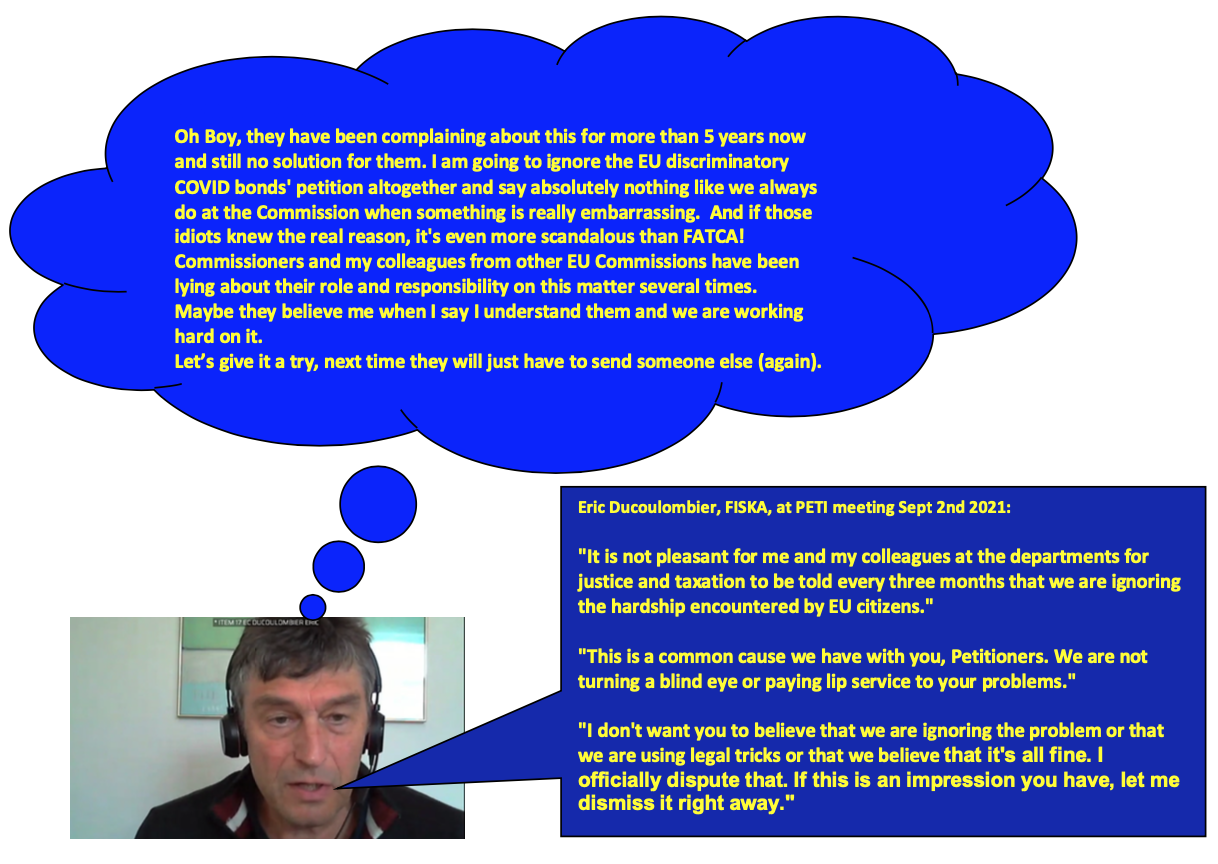 ADCS stands for the ‘The Alliance for the Defense of Canadian Sovereignty’, a non-profit corporation registered in Canada. The purpose of ADCS is to defend Canada’s sovereignty and its people from the attempt of other countries to impose their legislation on Canada.

Their lawsuit was originally filed on August 11th , 2014 in a Canadian Federal Court. They asked the Federal Court of Canada to kill the FATCA agreement between Canada and the United States that rounds up innocent Canadians and turns them over to a foreign government.  See the original >Claims submitted by the Plaintiffs. The Claims describe some of the laws they believe are violated by the FATCA agreement.

see: >ADCS | Alliance for the Defence of Canadian Sovereignty (adcs-adsc.ca)

The lawsuit is currently to be argued in the Federal Court of Appeal. To follow the suit’s status see: >http://isaacbrocksociety.ca

This site is remarkable for its sheer amount of information since many Canadians are dual citizens.

The Isaac Brock Society consists of individuals who are concerned about the treatment by the United States government of US persons who live in Canada and abroad. This Canadian group has started a legal action to prove that FATCA is against the Canadian Charter of Rights and Freedoms.

“Association of Americans Resident Overseas (AARO’s) purpose is to create and maintain ties among American citizens located in and/or residents of countries other than the United States, with no regard for their political preferences or party affiliations, in order to:

Keith Redmond has very early on coordinated efforts between French, Canadians and many American organizations including congress to combat Citizenship Based Taxation.

“The American Expatriates group is for those who fully support an end to extraterritorial American taxation adversely affecting many populations outside the US. The US must cease imposing its tax code outside the US on tax residents of other countries.”

“SEAT is an independent, nonpartisan organization with no affiliation with the tax compliance industry.  The mission of SEAT is to provide an educational platform for:  individuals, politicians, governments, academics and professionals about terrible effects of US extraterritorial taxation. The imposition of US taxation on the residents of other countries damages the lives of the affected individuals, and siphons capital from the economies of other nations while eroding their sovereignty.”

A bi national Israeli US lawyer who has been repeatedly suing the US government against GILTI. It is a tax that applies to US owned businesses abroad but it is particularly penalizing for small businesses that are treated like major multinational corporations from a tax standpoint.

“This group is focused exclusively on the battle of American small businesses against the abuses they have suffered and continue to suffer at the hands of the U.S. Congress and the Treasury/IRS.

A private person who is saying “Enough is Enough!”