Our 13 requests to the European Parliament #

That the European Parliament mandate immediately ESMA to investigate the actions - or lack thereof - of the National Competent Authorities of 11 countries that allow discrimination against European US bi national citizens in documents regulated by EU law.

The countries are: France, Belgium, the Netherlands, Germany, Austria, Sweden, Luxembourg, Italy, Spain, Denmark, Ireland. (It should be noted however that discriminating mentions can also be found in the financial documentation coming from Switzerland and the United Kingdom. )

We request that both the European Parliament and the Council use the powers conferred onto them by Article 18 of the TFUE to stop this discrimination immediately.

That the European publicly audition in this Parliament Ursula von der Leyen to ask her how tolerating such discrimination is compatible with her duty as President of the Commission and the oath she solemnly and publicly took in Luxembourg and to ask her as well what actions she intends to take immediately to put an end to it.

That the European Parliament inform Ursula von der Leyen that these 4 petitioners wish to present to her and in person the proofs that show the extent of the discrimination of which we are victims so she realizes that European Treaties are breached by the major players of the asset management industry - some of non Member States, Americans, Swiss and British in particular - with the tacit consent of European institutions and national authorities.

That the European Parliament investigate with European law experts if FATCA IGAs do not breach European citizenship as expressed by the European Court of Justice in “Micheletti v Delegación de Gobierno en Cantabria” 369/90 - EC 1992 - since as a result of FATCA, the US citizenship of European bi nationals takes precedence over their European citizenship for European financial institutions and Member States' governments as a result of which their data is being routinely exchanged with a non Member State. (Model 1 and Model 2 of FATCA IGAs).

By the 2ⁿᵈ of August 2024 the Commission shall, on the basis of a public consultation and in light of discussions with ESMA and competent authorities conduct an evaluation of the application of this regulation.

We ask the European Parliament to ensure that this evaluation be indeed public , and not open only to ESMA and competent authorities but be open to all European citizens so over one million bi national EU US citizens can voice their opinions about the implementation of this directive.

The spirit of all Directives and Regulations on passporting is, we hear ad nauseam, retail investors' protection. Retail investors must then be heard. The 2024 consultation must be entirely public, transparent and open to all citizens. We are the true stakeholders and as such we want to participate.

That the European Parliament inform publicly and in writing Ursula von der Leyen that given their gross dereliction of duty to the European citizenry, to the Treaties and the Charter of Fundamental Rights not to mention their lies by either omission or commission to our elected representatives, we feel strongly that:

should all tender their resignations effective immediately.

We ask the Parliament to request the appointment of a special person at the Commission level as our interlocutor and also one at PETI.

We request the European Parliament to reject at least 2 members of the ESMA shortlist for candidates to its chair, namely Maria Luisa Albuquerque and Carmine di Noia:

We feel strongly that both those individuals must be removed from ESMA’s shortlist of candidates to the ESMA chair immediately and that given their respective track records, their presence on this list shows a brazen lack of respect for over a million EU US citizens. Appointing either of them to the ESMA chair would be adding insult to injury.

The horrifying discovery that the European Commission and Euratom are discriminating us EU US bi nationals has prompted four additional requests. One of which is, of course, that the European Parliament vote a motion of censure so this discriminatory and law breaching Commission leaves as soon as possible before it violates again the TFEU and the Charter, our fundamental texts solemnly stating the fundamental rights of each European Union citizen. 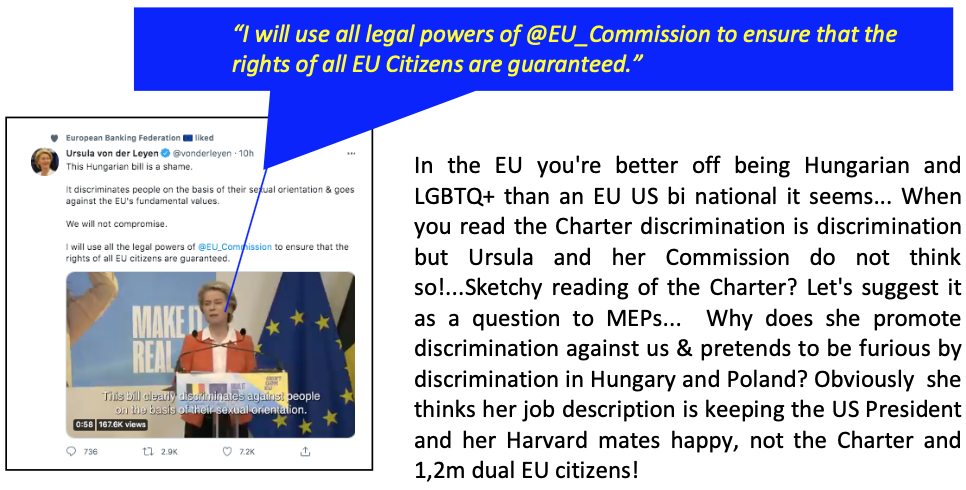 That the EP vote a motion of censure against the discriminatory von der Leyen Commission.

Given the EU open practice of discrimination against EU US bi national citizens and solely US citizens in its financial prospectuses and marketing material, which are EU regulated documents, we request the European Parliament, in accordance with article 234 of the TFEU to have a vote of no confidence towards the von der Leyen Commission.

Furthermore, this Commission, as the previous one, has repeatedly lied to MEPs and therefore to us saying that FATCA was not within its remit while practicing discrimination itself.

Restricting drastically the kind of job Commissioners may hold in the private sector after working for the Commission to avoid conflict of interests for a period of at least 5 years, that is during the next succeeding Commission.

That former Commissioners no longer be able to work for multinationals companies and financial institutions , as for exemple José Manuel Barroso for Goldman Sachs and sell their address books and contacts to get legislation voted in favor of said companies passed or business deals from the European Commission or favors from European Competent Authorities.

That the EU, Euratom and any EU related issuer no longer use the Luxembourg Stock Exchange and Luxembourg law as long as FATCA applies in any EU country as its national competent authority, the Comité du Secteur Financier (CSSF), turns a systematic blind eye to discrimination against EU US and solely US citizens which means rewriting those offering circulars and relisting the upcoming tranches elsewhere.

That the European Union, Euratom or any other European entity issuing on behalf of the EU no longer issue out of Luxembourg whose National Competent Authority has a special tolerance for discrimination until FATCA no longer applies in any member state. It seems that Luxembourg law, which prohibits any withholding tax on non residents, is in direct conflict with FATCA and that this contradiction can only be solved by discriminating EU US bi nationals.

That the order in which petitions are treated be dictated by the seriousness of the breach being discussed by petitioners; also that petitioners be consulted on the summary made of their petition; that their full petitions be published on PETI’s website.

We feel in our case that the summary put online misrepresents our petition by mentioning for example the GDPR - which is not the point of our petition - and not the fact that 1- the discrimination we are discussing is occurring in EU regulated documents and 2- that we are partially deprived of our EU citizenship as defined by the European Court of Justice which is the other point of our petition.