Once more, history repeats itself and Europeans discriminate again their fellow citizens in spite of the oft-repeated “never again” nauseating mantra, and this at the European Commission and Euratom level, the very top of European institutions and in the case of Euratom also a founding one.

Once more, EU institutions and Member states act outraged and sanctimoniously this time because of discrimination against LGBTQ+ in Hungary and Poland and yet find it normal to discriminate - within a legislation the EU Commission itself proposed and redacted - 1,200,000 EU US bi nationals in their own offering circulars.

Once more European Authorities lie, obfuscate and are clearly indifferent to the plight of the average citizen while they pamper powerful multinational companies, European or otherwise.

But this time the Commission has nowhere to hide. Article 51 of the Charter of Fundamental Rights applies to all European institutions including the Commission itself, the self appointed “Guardian of Treaties”.

To say that we are disappointed and indignant by the level of hypocrisy and complete disrespect of the treaties of the von der Leyen Commission grossly understates our feelings.

Since the EU is not threatened by the 30% withholding tax FATCA imposes on US revenues of non compliant foreign financial institutions, the only two plausible reasons why the EU is discriminating 1,200,000 EU US citizens in its prospectuses and marketing material are either or both:

1 - that the Commission does it at the request of asset management companies that do not want to take the risk of the 30% “withholding tax” and reduce their profits given the hefty administrative costs FATCA implies in a very competitive industry, or,

2 - that we bi nationals are pawns in a geopolitical game whose reasons we ignore. Clearly however the EU is extremely willing to sacrifice 1,200,000 of its citizens to keep the USA happy or as stated above, to do the bidding of banks and asset management companies.

Discriminating 1,200,000 average people and ignoring EU Treaties is the “small” price to pay if it suits powerful companies and/or influential non member states.

Although strangely enough, banks and asset management companies should be our natural allies but they never understood it. Banks may have recouped some of the expenses of implementing FATCA as costs but the asset management sector is much more competitive. So discriminating is the answer they have found with the active complicity of National Competent Authorities and the ESMA and following the European Commission’s and Euratom’s leaderships in their discriminatory undertakings.

Strange also that the two member states that list the greatest amount of discriminating funds, Ireland and Luxembourg had or have a Taoiseach (Leo Varadkar) and Prime Minister (Xavier Bettel) who are openly gay and in the case of Mr Bettel at least is vociferous against discrimination and to quote him “stigmatization” of LGBTQ+ in Poland and Hungary. Xavier Bettel and Leo Varadkar 1,200,000 EU citizens, some of them Irish or Luxembourgeois want to ask you:

Is discrimination against EU US bi nationals more palatable than against LGBQ+, less shameful as it were, if it solves your legal problem with FATCA and is, in addition, good for Luxembourg and Ireland funds and other tax avoidance industries which are your countries’ undisputed specialties? 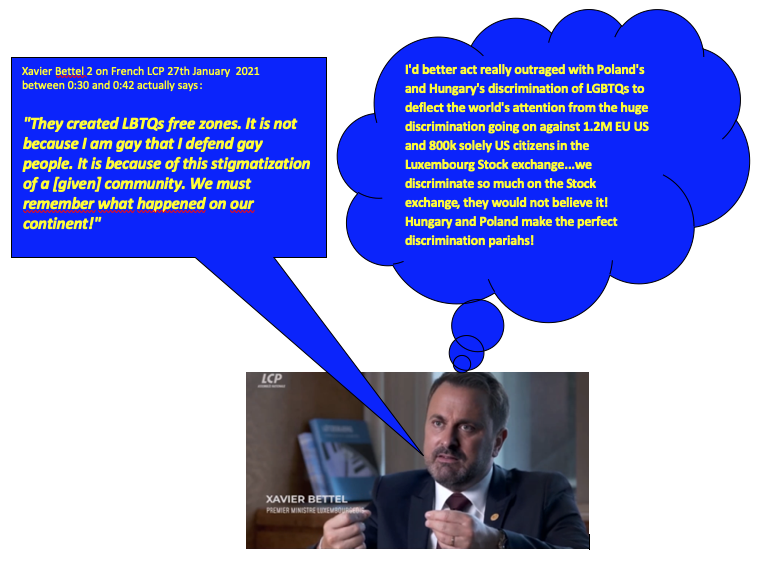 This is the type of hypocritical behavior that explains the recent increase in populism and the Brexit. It manages to discourage, to dishearten, to disappoint and to greatly sadden the most committed Europeans which most of us bi nationals will be for a while longer depending on how legally the oft raised GDPR issue, the repeal of the privacy shield, the discrimination and the partial but effective loss of EU citizenship affecting EU bi nationals are dealt with by the EU and within what time frame.

A vote of no confidence against this Commission seems the inescapable consequence of openly violating the Treaties, ignoring the CJEU’s decisions and its colossal hypocrisy (re: CERV and lies in Parliament by Commissioners), not to mention its total lack of respect for 450,000,000 EU citizens’ intelligence. Such a vote would go a long way in restoring trust should the present Commission and the Parliament decide to offer a real future to the European project and this by definition implies respecting its founding texts which is far from being the case at the present time as the documentation we brought forth inexorably attests to.

In fact, we think the Commission should resign of its own volition. It is the only thing to do given the seriousness of the breach it commits discriminating.

Otherwise, some may be justified in saying or having said that the European Union is nothing more than just another cumbersome bureaucratic behemoth benefitting a few to the detriment of the many; in this instance 1,200,000 million European citizens.

One is tempted to plagiarize Churchill talking about the RAF during WW2 and say:

“Never have so many discriminated so much for the benefit of so few!”